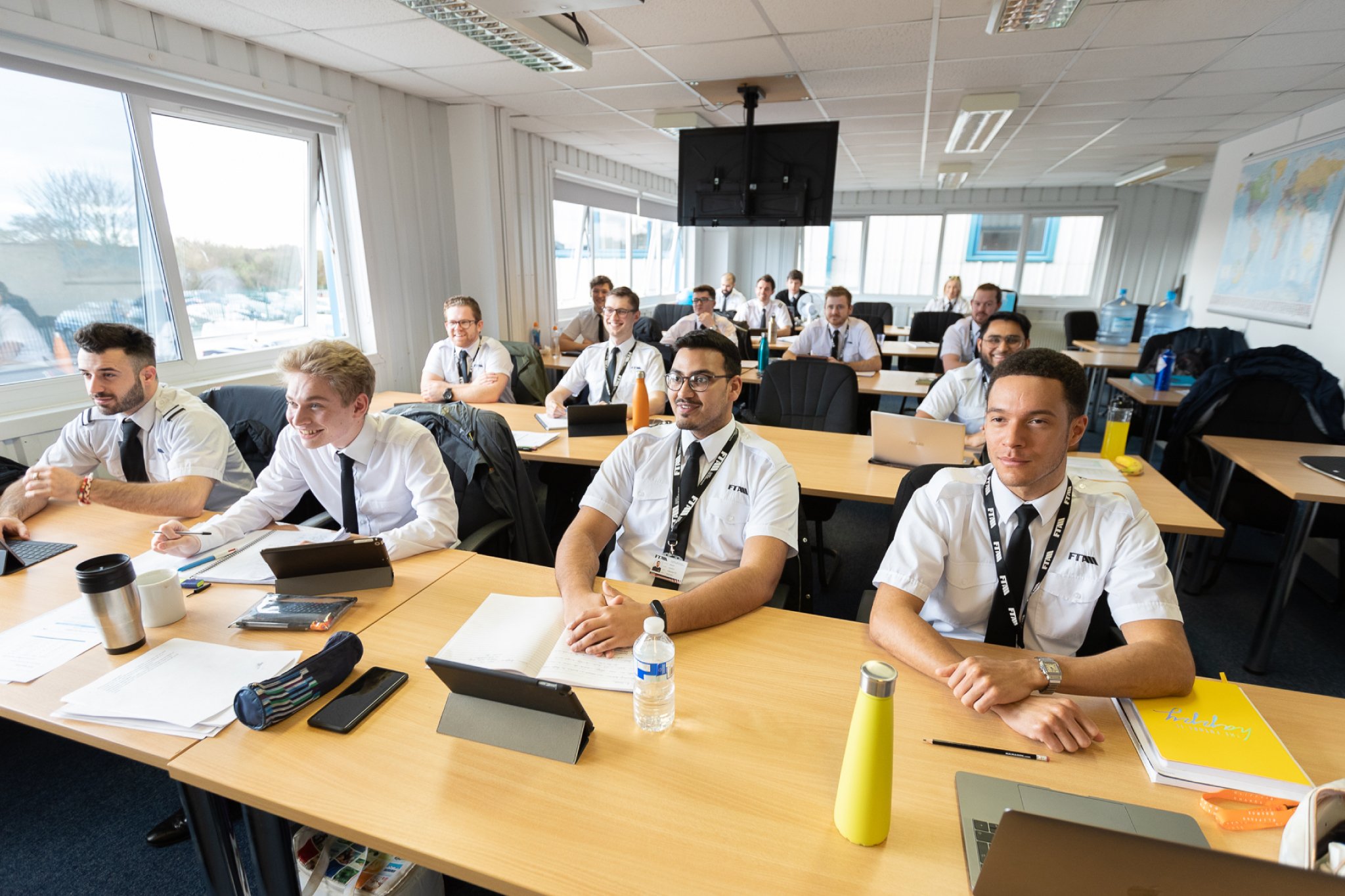 The ATPL Theory programme is full-time and is delivered over nine months at our base at Brighton City Airport.

Few commercial flight schools offer ATPL theory as a classroom-based course, with many offering distance learning/online or a part-time solution. Training in a classroom offers a number of benefits over distance learning; such as the ability to ask specific questions of the instructor whilst also learning at the same pace of their classmates. There is also the benefit of periodic one to one reviews with an instructor throughout the training, which are the perfect opportunity to reflect on an individual’s performance and share any concerns about upcoming subjects or exams.

At FTA, we also offer daily 'surgeries' after normal class time for students to ask questions one to one or as a small group with their instructors.

ATPL Theory requires considerable focus, study and revision and some students find the prospect of this element of their pilot training quite intimidating. However, as with any part of your training to become a commercial pilot, if you start as you mean to go on; prepare for each class, and review what you've learnt at the end of each day you will be successful in your training.

An initial payment of £2,500 is required for a course place to be booked.

The first payment of £1,450 is taken at the start of the ATPL Theory Course.

The remaining three payments of £2,000 each are taken on the last training day of each module.

Any additional course fees incurred are invoiced in addition to the basic course fee and are due 3 weeks before an exam sitting.

What are my study options?

If you already have a private pilot's licence and an appropriate medical certificate you can enrol on our full time ATPL Theory course.  At FTA we deliver the training using PadPilot course materials, these are accessible on an iPad or laptop – which means that you can complete additional study and revise anytime, anywhere.

If you want to continue working whilst you study, it may prove better for you to complete your ATPL theory via distance learning with a company such as Padpilot or Bristol Groundschool.

We group the 13 subjects into three modules – with exams at the end of each module. You have up to six sittings to complete a total of 13 exams, although typically this can be accomplished in three sessions.  If you are training towards a Dual License, each exam will need to be taken twice, once with the UK CAA and once with an EASA Authority.

Please see below for more detail regarding each module and the subjects within.

How long does the ATPL Theory take?

We deliver the ATPL Theory over nine months. The classroom-based tuition is delivered 5 days a week, Monday to Friday at our base at Brighton City Airport, UK.

Get a head start on your studying

To help you get prepare for the start of your ATPL Theory, Padpilot have introduced a new Pilot Foundation Course. This is a three-part series of digital iBooks which feature a practical and solid foundation of both industry and theoretical knowledge to equip the aspiring pilot for success during training. Click here for more information about the iBooks

Instructors also advise (if you've not studied maths or physics in a while), to refresh your knowledge with GCSE course handbooks.

A key component of the course is meteorology, including how the weather is forecast and what data is produced. We also study cloud formation, temperature, climatology and density. A key part of this subject is understanding the potential dangers of the weather and how flying is affected. Students will study other components within the topic, including:

Here we look at the aircraft and how it operates. The aim is to gain a high level of understanding of how the different parts of the aircraft work including:

After getting to grips with aircraft general knowledge, students study Air Law. Whilst this component looks at the rules of the air including how we legislate (Starting from the Chicago Convention in 1944) and the division of airspace. The course also includes other legal factors such as:

There are two communications topics which are studied in the first module. These are broken down into Instrument Flight Rules (IFR) and Visual Flight Rules (VFR) Communications. IFR focuses more on the aircraft itself in relation to ground such as ATC clearances, Standard phraseology and emergency phraseology used, whilst also covering the key communication principles and failures within the aircraft and ground. VFR ensures that students have knowledge in meteorological data and weather reporting from the aircraft and how the equipment can be used. The subjects explored in each topic are as follows:

In this module we cover the principles of flight and consolidate some learning from topics in module one; linking with meteorology which including the atmosphere, wake turbulence as well as lift and drag. Other areas covered within this topic are: turning, climb and descent, stability, spins and stalls, aerofoil and propellers. Principles of flight includes the following:

In this subject, our instructors teach students to understand the use and purpose of the instruments in the cockpit of an aircraft. The areas covered are as follows:

In Flight planning procedures students learn how to plan a route effectively considering factors which may have an influence. Students also look at the following:

General navigation takes theory from Satellites and the Solar system and applies it to aviation. The areas we explore in more depth are as follows:

Here we look at the principles of Radio Waves to grasp an understanding of how the communication works. The course then follows to cover the following:

The Human Performance and Limitations topic gives an insight into the psychological factors of performance and how it could affect flight by studying: the eye, ear, perception and human error. The topic also covers the Human Body, Nervous System, Atmosphere and Oxygen, respiration and Human overload/.

Mass and Balance includes calculations which involve aircraft centre of gravity, weight and loading of aircraft and mathematical ideas using formulae. The other topics we cover as part of this subject are as follows: