We recently caught up with FTA Integrated student Taariq Iqbal, who commenced his pilot training with FTA in 2016. Taariq recently completed his ATPL theory exams and is about to commence his commercial pilot training on our Multi-Engine Diamond DA42 aircraft. Here we found out just what inspired Taariq to become a Pilot: 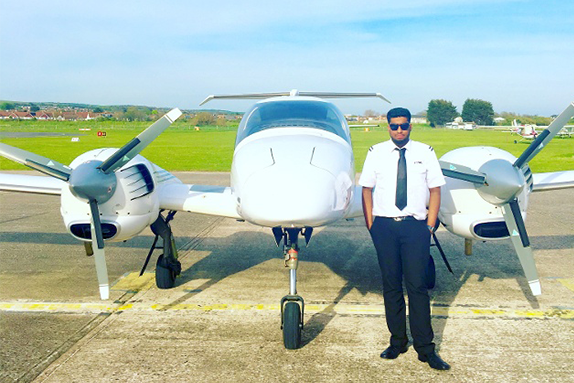 During both primary and secondary school in the holidays, I would force my parents to take me to my hometown airport of Birmingham and just watch planes take off and land for many hours. As I grew older I continued my pursuit in becoming a Pilot by enrolling on a course at college to study Aeronautical Engineering. It was here that I studied multiple subjects such as Gas Turbine Engines, Avionics and Principles of Flight. I knew these would be key in setting the foundation of achieving my dream goal and would help me on my path to success.

WHAT WAS IT LIKE GOING SOLO FOR THE FIRST TIME?

The first time I went solo was one of the highlights of my life so far. After completing my circuit lessons, my instructor turned and said to me that he thought I was ready to go solo. I started up the engine and began taxiing to the holding point. I felt so nervous, but as soon as I took off, all the nerves were gone. I completed the circuit and landing, where Air Traffic congratulated me. It was an absolutely surreal feeling. After I shut down the engine, my instructor handed me my first set of epaulettes and handed me a solo trophy. It was great to finally feel like my hard work was paying off and my dream was beginning to come true.

After getting a tour around FTA and speaking to the Flight and Ground School Instructors, my decision had been made; FTA was the one for me

WHAT WERE THE NEXT TRAINING STEPS THAT YOU FOLLOWED?

After completing my solo, I continued flying the Diamond DA40 where I practiced stalling, steep turns and Navigation flights. This included the introduction of land away flights to locations such as Southend and Lydd. We are lucky to have our UK base on the South Coast of England, as it means we get to see amazing scenes and views on a daily basis. Then in May 2016, I started my ATPL Theoretical Knowledge exams, which were without a doubt one of the most challenging things I have ever done.

I have just recently commenced flight training after my ATPL Theory. I am due to start my Multi-Engine Piston flights before then taking my Commercial Pilot Licence Skill Test. I’m feeling very excited about it all at the moment!

WHAT WAS IT THAT INITIALLY ATTRACTED YOU TO FTA?

While at college I started looking into flight schools and came across 3 major schools in the United Kingdom. After extensive research I finally settled with FTA for 2 major reasons; one being the price and the other being the fact that 100% of the training could be completed in the United Kingdom. The 2 other schools were asking in the region of £100,000 to complete integrated training, whereas FTA were offering it for around £70,000. It seemed a no brainer for me to simply choose FTA! After getting a tour around FTA and speaking to the Flight and Ground School Instructors, my decision had been made; FTA was the one for me. 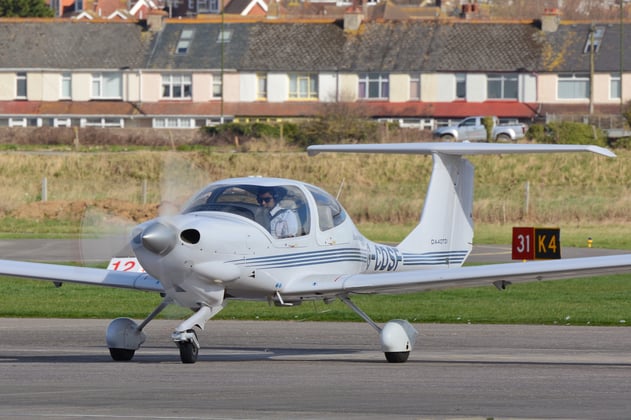 WHAT WOULD YOUR ADVICE BE TO ANY FUTURE TRAINEES?

My advice would be if your dream is to become a Pilot, then by all means you should pursue it! Of course nothing in life is easy if it is worth achieving and a lot of hard work, dedication and motivation is required. But, if you put in the effort, it will all be worth it!

WHAT ACTIVITIES DO YOU DO DURING YOUR SPARE TIME?

With FTA, you make lots of new friends whose goals are the same as yours. This enables you to grow as a person and create a strong bond with them. We all usually go out to restaurants in our spare time and usually partake in fun tasks such as Bowling and Golfing. There is always enough time in between training to wind down and enjoy video games such as FIFA and play flight simulator.

We are lucky to have our UK base on the South Coast of England, as it means we get to see amazing scenes and views on a daily basis

WHAT ARE YOUR FUTURE PLANS AFTER TRAINING?

After completing my training, I will be enrolling to do a Jet Orientation Course (JOC). Upon completing this I will then apply to as many jobs as I can. At FTA, we gain an EASA Frozen ATPL, which will entitle me to work anywhere in Europe. This really opens up the opportunities to getting a job.

← Women of Aviation Week - can the gender gap in aviation be readdressed? Would you ever fly on a Pilotless plane? →