Taking to the skies - Alessandro Naibo

When searching for a flying school, I was mainly looking for programs that were reasonably priced, had high standards, and the language spoken in the country. It was important for me to be surrounded by native English speakers, so I  could improve my English and be able to stand out amongst other candidates at job interviews. This is why I chose FTA Global in Brighton. 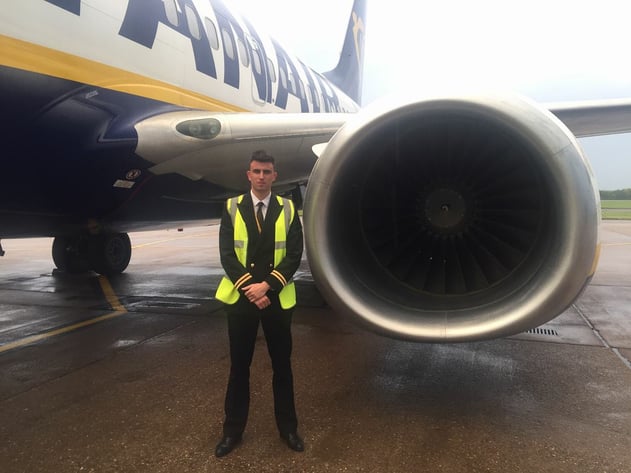 HOW did you find out about fta?

what qualifications did you take and how did you find the course?

After completing my training at FTA and waiting 1 month to receive my licence, I applied to the Boeing 737 type rating course with Ryanair and luckily after only 5 days I received an email asking me to present myself to Dublin for an interview

how long did it take from finishing the course to securing your first interview and job offer?

HOW did you hear about the job opportunity?

can you briefly outline the application/interview process for the role?

On a typical day, I report to work one hour and an half before departure, I enter the crew room and I print the flight plans for the forthcoming flights. Then, I thoroughly go through all the paperwork to check the airplane maintenance status, weather, and any other relevant information. Just before heading to the plane, I have a briefing with the captain and the crew. During the briefing, the captain and I also decide who is going to fly the plane. Usually, if we do 2 flights in a day I fly one of them and if we do 4 flights I fly 2 of them.

It is very exciting to have control of an aircraft such as the Boeing 737. It is hard to put into words the thrill I feel when I am landing a 70 ton airplane at over 160mph on a new, unknown airport in dense fog or when I am battling with wind and adverse weather. It is also really satisfying to know that I safely carried hundreds of people to a different country thousands of miles apart.

what are your aviation career goals - what would you like to do in the future?

← What is the best way to get your frozen ATPL? Kamil explains how he's just secured a job with a commercial airline after completing the BESTPILOT programme →